The Orbán Foundation was legally established in 1996 as an initiative of Orbán András who has been looking for possibilities to help people in need.

The first class for children with special needs was opened in 1998 by Orbán Katalin Zsuzsanna, the daughter of the founder, since in Odorheiu Secuiesc there was no kind of education for children with disabilities. The children were kept at home, often hidden because of shame. To the first class six children came from the region to a rented room where two teachers were leading the education from morning till afternoon. For the first time in their lives these children were being taught learning, reading, writing, basic mathematics and others.

In 1999 the need for education was so high that the foundation rented a 3 room apartment and started three classes with more teachers. In the same year, the foundation was facing abandonment problems since the parents of the children came demanding from us to take them into our full-time care or else, they were going to take them to a state orphanage. Our first child in full-time care was Lali, who is still living with us. Teachers were taking turns and staying overnight to offer a home for him, full of enthusiasm. In parallel to the education we started to perform daily activities and rehabilitation as well.

In 2000 the Child Protection Agency of Harghita County was faced with the decentralization process, thus had to return the abandoned children with special needs from other counties. Decentralization meant that every county had to turn the children to their own county, where they were born. Harghita County did not have any institutions, not even a state run one for children with severe disabilities. For that reason the Child Protection Agency asked the Orbán Foundation to take in the severe cases. Thanks to this, eight children came to us. These children have been living with us since then as well and we hardly know anything about their families. Most of them have never been visited by anybody ever. We also take children into our care left behind by parents in hospitals and most of our children who have arrived then still living with us. We organized the staff required for the night duty with three people too. During the day, we were holding education sessions for our adopted children and the others coming to us from families. In these years, there were around twenty-five children coming to us.

In 2002 we moved to a rented house and the children have been living there ever since. More were brought to us from parents or other places. We have fifteen children in our full-time care at the moment. We provide education and rehabilitation to them. We have become a big family full of love and joy, challenges come up but we keep facing them. Every year we try to organize two or three camps to rural areas so the children get used to being among others, see the surroundings and gain experiences.

Since 2004 we have been organizing a workshop, where the children can learn different skills. We have also been using ergotheraphy to channel the feelings and emotions that they experience during the day.

In 2008, our rehabilitation center moved to a rented house. Since then we have been operating in the two rented buildings.

We quote Zsuzsa's words: "They are a part of me. It is not a feat, it is not a big deal, it is not a sacrifice, this is our way of living. I do not feel that hard, or what I do or what I get, it is natural." This is the way we try to follow in the future. 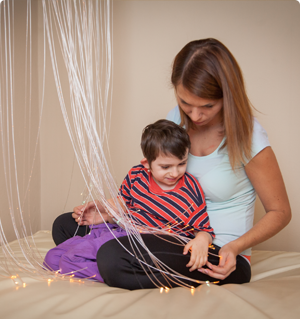